This is what I’ve been up to the last month, as well as doing quite a bit for bbc click recently… including working with the marvellous Maggie Philbin on our futurology piece. She’s done such a brilliant post here about our visit to Kingswood Warren that I don’t need to add anything…

OK, I will add that we both turned up on the ShiftRunStop podcast last week.

Here are some behind-the-scenes pics of the birthing of ClickBits. 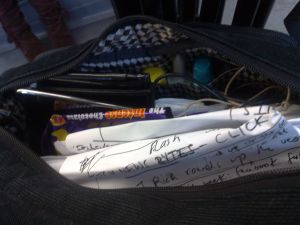 – yes I did eat that twirl. And I didn’t bother taking pics of the usual tv stuff including filming pieces to camera, script wrangling and finding pictures to fit. Unless you want me to next time?

Also the madness of only having a finite amount of time to do an infinite amount of work is the sort of thing is familiar to techies everywhere. Editors, I’m thinking of YOU when I type this.

tape of episode 1 ! yes, tape! Click on this if you want to see episode 1, but episode 2 is better 🙂 Click on the top pic for that.

The grown-up edit suite was double booked for our first episode, but it didn’t stop us – we squeezed into a small office and crowded around a desk and computer meant for 1 person.  Final Cut Pro, in case you were wondering. And yes, we ate a LOT of choccy in  a room so cramped all our knees were touching.

on its way into the BBC system?

This was our 2nd attempt to ingest 3 mins of video into the BBC, we were thwarted by technology many times! It’s always worse when a BIG machine borks – I always (illogically, irrationally and incorrectly) expect computers with 4 screens to be, I don’t know, cleverer.

Finally, the wondrous Zoe (who is producing this with me and is the illustrious @zsk on twitter) came across this hidden terminal and executed some kind of Harry Potter spell that meant the machines had to obey her – and they did.

As I’m off to CES Las Vegas 2010 next week, Zoe and I will be attempting to make the 3rd Click bits episode a few thousand miles apart… we’ll be using yousendit and psychic powers to make that work, but if anyone can do it, it will be the 2 most stubborn people at the Beeb – us!